‘Since you came here, you brought another island in you’

My ideal place is the one in which it is more natural to live as a foreigner: that is why Paris is the city in which I got married, I settled, I had a daughter. My wife too is a foreigner: among the three of us we speak three different languages. Everything can change except for the language we have inside, or better, which contains ourselves as a world more exclusive and definitive than the maternal womb

With no consideration, no pity, no shame, /they have built walls around me, thick and high. /And now I sit here feeling hopeless.I can’t think of anything else: this fate gnaws my mind –/ because I had so much to do outside. /When they were building the walls, how could I not have noticed! /But I never heard the builders, not a sound./ Imperceptibly they have closed me off from the outside world

Under any circumstance, migration is not just about a rupture: an immediate, ineluctable change. It also determines a kind of self-perpetuation that, unlike the decision that gave it an impetus, carries out through slow, deep and constant rhythms. So, while on the surface all we record is the turmoil of a sudden change in the scenery and the vague farewell to long-ago tamed landscapes, deep down, a continuous process to perpetuate the awareness of who we are, symbolically, emotionally and contextually, moves forward, by blending memories and expectations. Leaving a city, a land, an island to head toward other cities, lands, islands, is one founding act – among many others – by which the individual claims, makes sense of, and establishes the continuity of their presence in the world. One could argue that, beyond the many meanings and consequences covered by such an experience, the act of migrating represents a kind of multi-situated ritual of presence just in the moment of the utmost exposure of the individual to the risk of losing themselves, to the inevitable fragmentation of their old and familiar horizon.

Horizon. The word jumps out at me during one of our interviews. My interlocutor remembers how, far from home, she misses a particular horizon quite badly – one that occupied her glance for a long time. Among the pages of a beloved text of mine, the italian author Cesare Pavese imagines a dialogue between Odysseus and Calypso. These are the words of the nymph: “if you do not renounce to your memories and dreams, if you do not lay your eagerness down, eventually accepting the horizon, you won’t ever escape from the fate that you know.” (Pavese, 1999: 101)

The fate of Odysseus we all know (and later Homer, Dante and Pavese remind us of it quite vividly) is one of restlessness. Restlessness about knowing, leaving, “ma misi me per l’alto mare aperto” (Alighieri, 1304-1321, v.100), he tells the reader – once imprisoned into a blazing hellish flame, according to the author in exile from his florence. Restlessness of returning. “Since you came here” – Calypso continues through the words that Pavese gave to her – “You brought another island in you” (Pavese, 1999: 103).“I have been searching for it for a long time. You don’t know what it means to catch sight of land, squint my eyes, but only to see that each time, I’ve deceived myself. I cannot accept that and merely remain silent.” (ibid.) – Odysseus replies. The horizon is not a mere faraway line, a view, a city, an island. It is not just something that, year after year, determined our world of imaginaries and possibilities. All this aside, a horizon is something that slowly passes through our flesh, to engrave its shape onto a permanent inner landscape – it is among the many ‘mother tongues’ which we speak in.ambivalent, malleable and elusive, both abstract and concrete, ours and someone else’s… that’s what this horizon is. Likewise the presence, our peculiar being in the world made by memory and experience, that across the line of such horizons stands out, traces and draws its lines; or finds in them its limits, and starting from them, any possible way out. The issue of the presence, and of the wonderful way the italian ethnologist Ernesto De Martino dealt with it (De Martino, 1973), is one of the key concepts of anthropology, the discipline to which I ritualistically turn to make sense of the world. My twenty-year relation with it, with its reasoning, the departure it pushed me into, the people I met thanks to it, the complex and eclectic looking glass it put between my glance and the world, have traced the most consistent part of a multifaceted perceptive, emotional and cognitive inner landscape; in other words, the coordinates of my being here and now. Being in the world means the creation of a reiterative, ritualistic and narrative connection with various times and places: with one’s own homeland, and with the soil where, at the present, our feet are grounded. Sometimes these places coincide, sometimes they don’t, so that the places of our maturity are different to the ones of our childhood. Nevertheless, the thread connecting us to the place we come from is the same thread we let loose when we run towards what we hope, or what we fear, awaits us in the future. It is this thread that ends up weaving what is both the intimate and collective – and certainly complex – storyline that makes up an individual. Intimate because it’s the result of experiences and choices which are individually unique; collective because, besides being the story of a life culturally and relationally structured, it also reflects experiences that are universally shared across centuries and latitudes. Universally shared experience, but also an issue implying detachment, loss, renouncement, struggle and courage, migration comes to us as a delicate matter, and as such it needs to be handled with care.in this regard, an approach that doesn’t shy away from the lacerations of the experience, but which is also able to dedicate space to the strategies and practices which aim to rebuild the individual’s life – and which do not stop at mere survival – proves to be not only necessary but also attentive to the delicacy of the process, to every facet of it. Within many discourses about migration, this would enhance the possibility to address, beyond the exceptionality of the stories, also common and comparable acts, susceptible to encourage a fruitful dialogue and, thanks to that, a possible overcoming of that iniquitous power of position, language and representation that seem to contaminate even the most emphatic and open-minded among us. Differences should be taken into account without, nevertheless, allowing them to limit a reciprocal and necessary translation. One has to remember that, by switching from a burdensome issue for us to a tragic and dramatic issue for them, the dangerous coincidence between migration and problem does not disappear, it simply shifts perspective. In other words, addressing the issue by simply evoking misery and distance means condemning both the process itself and its protagonists to a multiple and definitive alienation.

On the contrary, by reconstructing in the narration the details of a daily life to be structured again through projects, relations, carried, forgotten or lost objects, family ties, the individuality of the migrant ceases to be the indefinite and instrumental protagonist of a statistic, of an newspaper article, of a picture taken beyond a fence, on a boat, along a dusty road. It regains substance and complexity. It reclaims his peculiarity through a self-narration. Between what I am and the story of my life, there is an equivalence, Paul Ricœur emphasizes (Ricœur, 1988: 7). and what we are goes far beyond simply boarding and waiting.

Various migrant voices found themselves in the act of speaking a common language made by daily practices and ordinary habits, objects and places of memory; by the many strategies to build again, elsewhere, a sense of home. By details and contents that, ultimately, represent a shared and fundamental support of our being in the world, both in the mobility and in the immobility. After all, putting together different experiences through similar aspects is all about locating that point of convergence between horizons, which, though differently traced, are nevertheless the result of the same efforts and expectations. Obviously, in every experience of radical displacement, the structuring of one’s own presence, now elsewhere, requires far more reiteration and support than what’s needed in a ‘non-mobility’ situation.now, it could also happen, for various reasons, that these supports are slippery, difficult to recognize, hard to recall.

Then, something universal like literature can always be of some help – literature being an absolute and vital lieu de mémoire and a source of hope, and increasingly more ‘equal’ space because by being less western and eurocentric, it creates a strong backbone of discourse which anyone and everyone can contend with.that is why, in these pages, the reader found literary fragments directly intertwined with our collected narratives.“it is always about accepting a horizon, and for what?” (Pavese, 1999: 101) – claims odysseus, captive on the island of ogygia for seven years.i think, to come back to the beginning, that facing a horizon we always face a choice. It is always about accepting a horizon. Or leaving it. Or building it anew, because, and this is for certain, every horizon comes from a perpetual construction.it both faces our eyes and is not completely there; it is model and aim, past and present.and while the old horizon, with its profile, lights and sounds, takes on the mantle of nostalgia – as a source of refuge, rejection or idealisation – the new one calls for endless effort on our part; an effort in which daily practices, intentions, symbolic, affective and relational negotiation play a prominent role.

I am writing within the walls of my seventh, different home. I go mentally back to all the rooms where I seated down, ate, wrote, read, thought, left objects on the shelves, clothes in the wardrobe, unpacked luggage. When I think of all my lost homes, I think about the wardrobes, the first instant between their walls, with an open luggage on the floor. A horizon too is something we do and undo. a composition. The placement of objects, people and places on a far, vague shelf, throughout the narration by which, mentally and verbally, we put ourselves into a story of departures and returns.

“L’éternel errant n’a pas droit au retour”, the eternal errant lost his right to come back, Jean Claude Izzo writes, quoting Michel Saunier, at the beginning of his novel, Les marins perdus, the story of a dramatic limbo where feelings and memories get stuck (Izzo, 1997: 4). As is often the case, when it comes to departures. Nevertheless the impossibility of a return is partially true. It is true that nobody can come back to the place he or she left, because of reasons both inherent and beyond us. At the same time one cannot deny that every departure drags behind and perpetuates the breach to a new return, to more than one return. In the end, to return is but to find ourselves again, elsewhere. 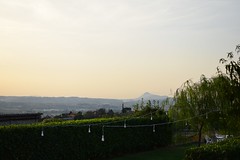